The town of Ocean City, Maryland is situated in Worcester County and became established in 1875 and was later incorporated in 1880. The “white marlin capital of the world” is well-known as one of the elite Atlantic “resort towns,” and spans nine square miles with a permanent population of 7,000 people; though, that number skyrockets during summer months to over 345,0000. Homeowners and vacationers in this town have myriad things to do from visiting museums, feeling adrenaline rushes at the amusement parks, shopping and dining, to lounging along the miles of beaches.

Ocean City hosts many thrilling spots including the Trimper’s Rides, Splash Mountain Water Park, and Jolly Roger at the Pier. The Ocean City Boardwalk is a spectacular time for families or those on dates, and those with an affinity for watersports like jet-skiing, swimming, and fishing have ample opportunities to do so at the pier and along the picturesque beaches. The renowned Ocean Bowl Skatepark, North Side Park, and the Gold Coast Mall are local fixtures that endorse seemingly endless recreation and entertainment, while the Art League of Ocean City and the Ocean Art Gallery present visitors with inspired visions.

Ocean City real estate in Maryland is located just south of Fenwick Island and offers homebuyers unparalleled views of the Atlantic Ocean, Assawoman Bay, and the Isle of Wight Bay. Waterfront homes for sale in Ocean City are widely available as well as more affordable houses inland. Buyers will find floor plans in the town range from 600 square-foot condos in Ocean City to magnificent private estates with over 5,000 square feet. Panoramic decks gaze out onto the water, welcoming breezes and the refreshing sound of waves. If you are interested in buying a piece of paradise in one of the Ocean City homes for sale in Maryland, please contact us today.

Don’t miss out on one of the best kept secrets in Ocean City’s finest bay front building. Original owners and never rented this unit shows like a model. Enjoy oceanfront ...

Simply breathtaking Ocean Front Building, with OCEAN views from Primary Bedroom as well as the balcony. Oversized windows and Slider allow for natural sunlight. Bright an...

Here is an opportunity to own the Iconic Crab Stop. Located downtown next to the fire station. Step right into a very successful business. Everything is set up and ready ...

Your new home away from home! Close to the bay, nestled in Isle of Wight Park. This 792 square foot home with 2 bedrooms and 1 full bathroom are walking distance to the...

Braemar Towers 13100 Coastal Hwy. Unit 150802 Ocean City, MD is a spacious condo located in the south building with views of the ocean, bay and city from the large southe...

Relish in luxury as you sit on your expansive waterfront deck, shaded by a lovely pergola and soak in the relaxing sights and sounds of coastal living in this stunning Oc...

Don’t miss this 3 bedroom, 2 bath unit located within walking distance to the beach! Open floor plan, stainless steel appliances! In unit washer/dryer! Could be a grea...

Welcome home to Gullway Villas! You're sure to love this two bedroom garden style condominium property featuring a ton of natural light and a large balcony overlooking th...

Southern exposure with nothing but an ocean view. Sea Watch boosts some of the most amenities In North Ocean City. Imagine taking the kids down to the movie theatre and ...

Perfect North Ocean City location! This spacious condo has 3 bedrooms and 2 full baths. You even have a peak of the Ocean from your front porch. 2nd floor location is per...

You're going to want to see this elegant and fully-furnished luxury-waterfront home located just outside of Ocean City proper. These sellers lovingly upgraded every as... 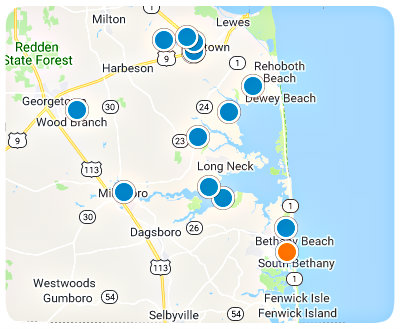